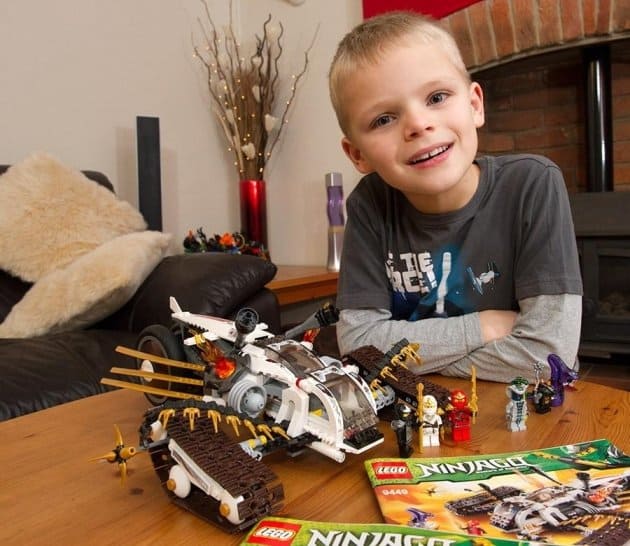 A 7-year-old boy has learned the power of really good customer service. See, Luka Apps spent all his Christmas money on a LEGO Ninjago Ultrasonic Raider set (a wise choice, in our opinion), which included a coveted mini-figure called Jay ZX. The problem is, when going on a shopping trip, his dad warned him not to bring the figures, but he didn’t listen. And at the store, Luka lost Jay ZX. He was heartbroken. And he had no choice but to contact LEGO and plead his case. Here’s what he wrote them:

My name is Luka Apps and I am seven years old.

With all my money I got for Christmas I bought the Ninjago kit of the Ultrasonic Raider. The number is 9449. It is really good.

My Daddy just took me to Sainsburys and told me to leave the people at home but I took them and I lost Jay ZX at the shop as it fell out of my coat.

I am really upset I have lost him. Daddy said to send you a email to see if you will send me another one.

I promise I won’t take him to the shop again if you can.

Luka received a reply from Richard at LEGO, who “spoke” to Sensei Wu—a Ninjago Master:

We are very sorry to hear about you losing your Jay minifigure but it sounds like your dad might have been right about leaving it at home. It sounds like you a very sad about it too.

Normally we would ask that you pay for a new one if you lose one of your minifigures and need to have it replaced.

My bosses told me I could not send you one out for free because you lost it but, I decided that I would put a call into Sensei Wu to see if he could help me.

Luka, I told Sensei Wu that losing your Jay minifigure was purely an accident and that you would never ever ever let it happen ever again.

He told me to tell you, “Luka, your father seems like a very wise man. You must always protect your Ninjago minifigures like the dragons protect the Weapons of Spinjitzu!”

Sensei Wu also told me it was okay if I sent you a new Jay and told me it would be okay if I included something extra for you because anyone that saves their Christmas money to buy the Ultrasonic Raider must be a really big Ninjago fan.

So, I hope you enjoy your Jay minifigure with all his weapons. You will actually have the only Jay minifigure that combines 3 different Jays into one! I am also going to send you a bad guy for him to fight!

Just remember, what Sensei Wu said: keep your minifigures protected like the Weapons of Spinjitzu! And of course, always listen to your dad.

You will see an envelope from LEGO within the next two weeks with your new minifigures. Please take good care of them, Luka.

Remember that you promised to always leave them at home.

Lance Armstong Fesses Up to What We Already Knew