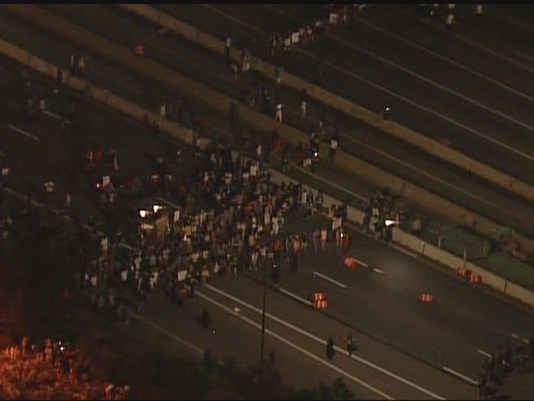 More than 100 people were arrested and 21 police officers were injured during protests against police brutality in Minnesota on Saturday night going into Sunday morning.

The injuries were mostly caused by fireworks, rocks, bricks, glass bottles and pieces of concrete being thrown directly at officers. One officer had a concrete block dropped on his head and is suffering from a spinal fracture.

Several law enforcement agencies were on the scene of the protests—the officers reported injured were from a mixture of agencies.

The protest blocked Interstate 94 in St. Paul for more than five hours before officers were able to move them off of the highway by beginning arrests after tear gas, inert smoke and marking rounds failed to get the crowd to disperse.

Fifty people were arrested on I-94 with charges of third-degree riot—at least eight of these people weren’t Minnesota residents.

On behalf of myself and our entire family, we urge all people to remain peaceful in all demonstrations throughout our community and our nation. When demonstrations become violent, it disrespects my son and his memory. Philando was a man of peace and dignity. Please, I ask you to at all times remain peaceful in your expressions of concern regarding his death at the hands of the police. I promise that we will not rest until justice prevails.

The U.S. Is Sending 560 More Troops to Fight ISIS

The Dangers of Pursuing Your Passion