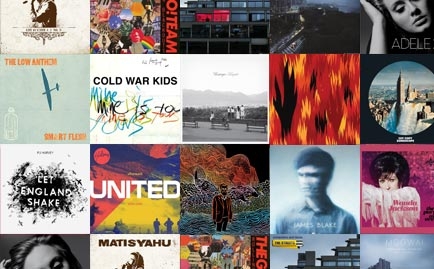 Now that the holidays are over, the winter weighs heavily on most of us. If you’ve never experienced a long, drawn-out winter, you need to move to Chicago, Minneapolis, New York or some other central or Northern city for at least one winter. Just to empathize.

But fret not: new music, like a dollop of whipped cream on your hot chocolate, can make the cold and snowy months even cozier. Check out these upcoming albums that will help get you through the winter doldrums.

Fans of Hasidic reggae will be stoked for the second volume of Matisyahu‘s Live at Stubb’s album, which comes out Feb. 1 on CD and DVD. Conversely, fans of massively hyperactive music will be excited to pick up Rolling Blackouts by The Go! Team. If you’re not already a fan of The Civil Wars, you should be. And you should get Barton Hallow when it releases on February 1.

Australian electro-pop outlet Cut Copy will get you back on the dance floor on Feb. 8 with their new LP Zonoscope. If a little more down-tempo electronica is your style, you’ll want to grab James Blake’s self-titled debut. His cover of Feist’s “Limit to Your Love” made the blog rounds a few months ago, and for good reason: it’s amazing. Finally, Feb. 8 also sees the release of the supposedly last album from The Streets, called Computers and Blues. We’ll see if this does anything to redeem Mike Skinner’s rap project after two terrible albums in a row.

Iron & Wine‘s new release on Jan. 25, titled Kiss Each Other Clean, should be another exercise in tender ballads to be avoided by bitter singles on Valentine’s Day. But career moper Conor Oberst resurrects Bright Eyes with The People’s Key on Feb. 15, in case those same bitter single people want to indulge in a little emo catharsis. If you’d much rather focus on God than anything else on the 15th (and good for you), Hillsong United is releasing a rare studio album, titled AFTERMATH.

British rock chanteuse PJ Harvey is also back on Feb. 15 with Let England Shake, an album she originally wrote back in 2008. Mogwai will also do their best to “shake” eardrums (see how we did that?) with their new album, Hardcore Will Never Die, But You Will.

More into crooning? Check out 21, the much-awaited follow-up to Adele‘s Grammy-winning debut album. Hitting shelves on Feb. 22, the album’s first single, "Rolling in the Deep," has already slithered onto airwaves with its rollicking, bluesy melody, and if that single is any indication, you’ve never heard Adele like this before.

That titan of chillwave Toro Y Moi will release his second album, Underneath the Pine, on Feb. 22 as well. But if you’d rather mourn the end of February, you should instead grab The Low Anthem’s Smart Flesh, which will likely be very, very sad.

We can feel a new re-release of Phil Collins‘ No Jacket Required coming in the air on Feb. 25, this time in a CD made from 24 kt. gold. Take that, iTunes.

Three-time Grammy winner Lucinda Williams unloads Blessed on March 1. Meanwhile, Swedish chanteuse Lykke Li finally returns with Wounded Rhymes, meaning some rapper automatically has a new backing track for a hipster-friendly mixtape. Christian rockers Tenth Avenue North, will release their new album, Inside and In Between, on March 1 as well. And on the complete opposite end of the spectrum, Kanye West and Jay-Z are rumored to be dropping the “we’ll see how this goes” collaboration Watch the Throne on the same day.

REM‘s 15th studio album, Collapse Into Now, will drop on March 8. Michael Stipe told SPIN that it will be a "very personal, very human record," which will be a huge relief after the band’s intolerably stoic hits like "Everybody Hurts." Similar purveyors of semi-saccharine AAA radio hits, Sixpence None the Richer, are also returning after reuniting a little over a year ago. Their new album, Strange Conversation, will hit your iPod on March 8. And Lupe Fiasco is supposed to release the long-delayed LASERS on the same day.

March 22 will finally herald the release of the still mysterious fourth album from the Strokes, and hopefully the end of Julian Casablancas talking about it endlessly in the media. Hyper-literate proto-hipsters the Mountain Goats will release All Eternals Deck on March 29.

Holy Ghost!, who is both a great producer and potentially the strangest band name for someone not on a worship tour, is releasing their debut full-length (it’s self-titled) on April 5. And Blood Pressures, the long-awaited fourth album from The Kills, comes out on April 5. Hey, Jack White, since you disbanded The Dead Weather, Kills singer Alison Mosshart finished their record … where’s our new White Stripes already?

Breaking Out of the Worship Formula