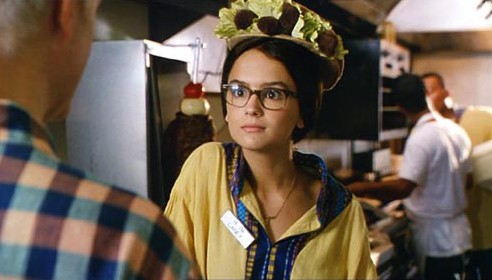 For children of the 90’s, the title alone triggers vivid imagery of a timid Rachael Leigh Cook descending the stairs a complete vision of 90’s beauty—platform heels, strappy red dress, hair perfectly flipped out. Even now, you can’t hear Sixpence None the Richer’s iconic “Kiss Me” without a flood of memories rushing through the open window of adolescent nostalgia. The moment lives on in the hearts of introverted adult women to this day.

She’s All That, Robert L. Flemming Jr.’s 1999 teen classic, takes place in the period’s true cultural nucleus, an affluent high school in southern California. The movie follows high school god Zach Siler on his quest to transform art dork Laney Boggs into the school’s senior prom queen, after he makes a bet to mend his ego after a public breakup.

Of course, the plot’s social insensitivity is laughably irredeemable both then and now, but 20 years later, She’s All That still finds major longevity amid our media-saturated climate through its intentionality and self-awareness. The film never takes itself too seriously, urging viewers to not only take a closer look at the cultural landscape of the time, but also laugh at that landscape, proud that, even then, we were aware of our shortcomings.

Reality TV cemented itself as an American cultural landmark in 1992 with the release of MTV’s Real World. For the first time on a popular scale, people could feed their fascination with other people’s private lives through the consensual window of a television screen, and—needless to say— the show was a huge hit. Fans developed attachments to their favorite participants, and those attachments catapulted contestants into unwarranted fame. In the 90’s, reality TV was not the comedic, voyeuristic experience it is now; it was aspirational, and there are few moments in the teen-movie rolodex that mock it as well as the initial breakup scene in She’s All That.

Early in the film, it-girl Taylor Vaughn, comes back from spring break and publicly drops Zach Siler for former Real World contestant Brock Hudson—“a celebrity.” In a wonderfully meta visual sequence, Taylor literally walks Zach through her spring break experience, detailing her tumble from MTV’s bikini platform into the chiseled (but somehow unimpressive?) arms of Brock. Taylor recounts: “I nearly fell off [the platform]! Which would have been so embarrassing, being on cable and all.” The entire sequence is gloriously 90’s and reeks of the era’s celebration of reality TV. To top it all off, the film takes another stab at the gratuitous fame of reality TV stars through Matthew Lillard’s perfect caricaturization of Brock’s bonehead narcissism.

When She’s All That isn’t indulging in its fun (admittedly mediocre) teen romance, it utilizes its outstanding supporting cast as another bridge to discuss culture. Perhaps the film’s most beloved example is Usher’s “campus DJ”. He’s introduced in the beginning of the film while broadcasting Taylor and Zach’s breakup to the entire school, but throughout the movie, he continues to flippantly spill the student body’s personal issues, oblivious to the wake of social destruction. Not only is his title a nod to the period’s magnified version of high school—a “campus DJ?”—but his lines are jam packed with archaic 90’s vernacular. He’s simultaneously a parody of the generation and the embodiment of every teenager’s worst fear, because he shines a light on the lunacy of shallow adolescent priorities. He’s a subtle, yet brilliant character.

That’s where She’s All That secures its heart. The movie’s characters and relationships retire archaic rom-com tropes without sacrificing viewer satisfaction. Laney’s childhood best friend reassures her that she’s “kissable,” Laney’s dad reminds her of the importance of being a kid. Zach’s sister gives Laney her infamous makeover, revealing the transformation by saying, “I present to you the new, not improved, but different Laney Boggs.” And we can’t forget Laney’s brother, who despite wanting to be just like Zach, stands by Laney’s side when Zach breaks her heart. She’s All That is not a perfect movie by any means, but its characters reveal its intentionality, crowning it not just one of the funniest, but one of the most heartfelt teen comedies of the late 20th century.

In the two decades since She’s All That’s release, dozens of filmmakers have made slow, but valiant attempts to speak about long-avoided social issues. While I wish I could say She’s All That foreshadowed this movement, it didn’t. It’s still laughable Laney Boggs was supposed to be irredeemably ugly, and the movie’s entire plot reinforces historically oppressive beauty standards for women. It’s bizarre Zach bought Laney a dress and insinuated she needed a makeover at all, and it’s sad his comments prompted Laney to never wear glasses again, despite Laney saying herself she preferred them to contacts. She’s All That certainly carries some demoralizing negatives of its time along with the positives. That said, while these frustrations cannot be redeemed, their weight is marginally relieved by the film’s attempt to break genre stereotypes through atypical character dynamics.

Early in the film, Zach approaches Laney at work, and she assumes he’s there to ask for tutoring. “I’m not smart,” Laney says. “I know people think, ‘Hey, there’s Laney Boggs, she’s a dork, she must be smart,’ but I’m not.” Zach laughs and stops her, saying, “Laney, I have the fourth highest GPA in our class.” Sure, it’s annoying that Zach is athletic, cute and smart, but at least the film makes room for more dimension in these characters at all, ushering in the revolutionary ideas that not all dorks are smart and not all jocks are failing. These characters could have easily fallen into the same tired, typical roles we saw dozens of times throughout the decade, but Flemming saw an opportunity to call out stereotypes and deliberately correct them.

Of course, in another 20 years, it would surprise me to discover anyone still discussing the cultural commentaries of She’s All That, but what cements the film as one of the great teen classics is that the notion isn’t impossible. Cultural relevance plays a pivotal role in securing a film’s shelf life long after its release. Beautiful art turns heads and comedic art can keep people laughing, but when art aims for cultural relevance, it bottles up its time period and renders itself essential to preserving the moment in which it was made. Then we can’t look at that moment without invoking its name, and that’s the magic of She’s All That. The film is a bottle overflowing with commentary about the microverse that existed within the halls of my high school, but also the vastness that existed far outside of it.

Kara is a writer living in Los Angeles. Don't follow her on twitter, she literally never posts. @kcaranice