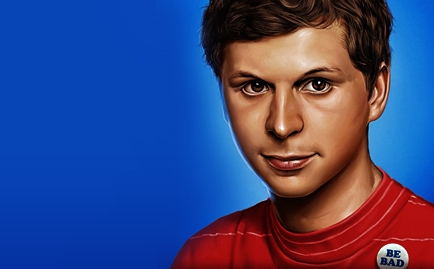 We talk to the Arrested Development star about his new movie, the AD film and … grain alcohol.

Since emerging on the pop culture scene playing George-Michael Bluth, a central figure in the groundbreaking sitcom Arrested Development, Michael Cera has carved out a niche playing sensitive nerdy guys in a quest for sex—but who also have a sensitive side that takes over, valuing true love in the end. These characters have also been somewhat one-note, although he plays that note of supreme awkwardness in brilliant fashion.

But just as Cera seemed to be stuck in a rut, he’s finally making some moves to shake up his acting career a bit by playing the dual role of sensitive-nerd Nick Twisp and his bad-boy alter ego Francois in the new film Youth in Revolt, which is based on the first three books in the six-part Nick Twist series by C.D. Payne. Cera is also going to play the title heroic character in the madcap British comic-book adaptation Scott Pilgrim Saves the World, directed by Edgar Wright of Shaun of the Dead and Hot Fuzz fame. In other words, a practically titanic merging of hipster comedy icons.

The 21-year-old Cera—who sports the strangest hair this side of David Letterman, and is just as soft-spoken and awkward in person as he is in most of his roles—sat down recently with RELEVANT to discuss Youth in Revolt and his burgeoning-career. He clearly enjoys making his interviewers feel as awkward as possible, but managed to tell us about the Arrested Development movie, his terrible mustache and … pure grain alcohol.

When you were 16 were you anything like this character? Were you a stranger in a strange land?

When I was 16, I was working on Arrested Development so those are my memories. Just trying to keep up with all those people and with school. I felt lucky being around them. Those were some of the funniest people I’ve ever been around, and I was enamored by all of them— I felt like a kid. But I felt lucky to be around them. It was a pretty unique experience.

Do you feel like you’ve established a Michael Cera brand of comedy?

No, I don’t feel like that. I just have had scripts I’ve had come my way that I really liked and was lucky to be attached to. I guess it’s really hard for me to think about it, I have no perspective of that whatsoever.

Was playing something different like Francois [his alter-ego rebel character in Youth in Revolt] a fun direction?

Yeah. I was really excited to play that part, and had a lot of fun playing that part and figuring it out with [director] Miguel. It was fun just putting contacts in, and putting the mustache on and transforming how I looked and cause bad things to happen and smoke. I had a lot of fun things to do with actors I admire too, like a challenging moment with Ray Liotta.

Did you model Francois after anyone?

Not anyone specifically, but I tried to capture how he felt in the book as much as we could. And I was inspired by Malcolm McDowell and James Cagney a little bit, but nothing compared to figuring out the books and how to make them work.

Are you a fan of the Nick Twisp books?

Yeah, especially [the] one actually called Youth in Revolt that links three of the books together. I was given [the book] when I was 16 but it took a long time to get made and I thought I’d be too old for it, but I really pursued it and was lucky.

Were there things in the film that got cut, or favorite scenes from the books that didn’t make it in?

There’s a great scene in the book that we shot one scene word for word but didn’t make the film, with Francois and Trent having a phone call, but I guess that’ll end up on the DVD. There were a lot of great characters that didn’t make it in from the books. I wish we could do it over as a TV series.

[Youth lead actress Portia Doubleday] revealed you were surprisingly comfortable wearing a dress and flip flops. Was that disconcerting or was it a revelation to yourself?

I think I was glad just to be wearing something. I’d just done a scene wearing only boxers and it was just nice not to have people see me as much.

How’s your game with the ladies? How do you go on a date when you’re super-famous?

I don’t know. This so-called stardom is still new, so I’m still figuring that out.

What’s the latest you’ve heard about Mitch Hurwitz [the creator of Arrested Development] and the AD film?

He said he’s going to start working on it soon. I don’t think there’s a set date. I think it’s something that he took his time on. He’s been waiting for a while to come up with it and will start next year after something else with Will Arnett.

Are you eager to see George Michael all grown up?

Yeah. I’m really interested to see what they write.

And what about you? Do you have a pet project you’re waiting to make?

I have a pet rock.

How did you rebel as a kid?

What does love mean to you?