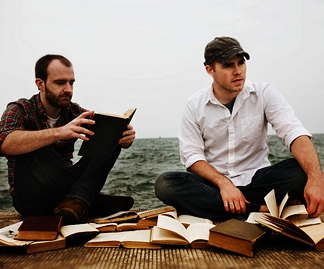 The Chicago band talks to RELEVANT about their highly anticipated new album.

It’s 2009, so it should come as no surprise that Chicago’s Sleeping at Last is ready to unveil their latest album, Storyboards [check out our review and stream the full album on The Drop].

Members Ryan O’Neal and Dan Perdue recently gave RELEVANT the first interview about the new album. Here’s what they had to say about surprises, expectations and how a ukelele now plays a major part:

Tell us about Storyboards.

Ryan O’Neal: We’ve been pretty focused on writing the record during all of 2008 in between touring. Things started to really come together at the end of the last year where we got all of our song selections out of the way, I would say. We started pre-production in January of this year and then started actual studio time in the end of March. So we’ve just been chipping away at it ever since then. It’s been coming along great and we’ve had a great time recording. This process has been, for me at least, my favorite of all of the records so far.

What makes you say that?

Ryan: I think Dan and I are just really feeling comfortable in our own abilities and we’re both really excited to be stretching as much as we can trying new things musically. It’s been very gratifying and really fun to piece it all together.

The three-year cycle, is that a good thing for the band?

Dan Perdue: Yeah, it seems to be the natural way things work for the band. I don’t think we planned on doing a three-year cycle, but [that’s] just the time it takes to record and then to tour as much as you can to promote a particular album. So when you’re ready to start writing and recording again, it’s been that three-year mark for us. I think we’d like to try and shorten that a bit, but we’ll see how that goes.

What is it about your music that it has to “gestate” longer than other bands?

Dan: I think a lot of it has to do with our focus. When we’re touring, we’re really focused on the live show and playing the songs that we have. When we’re writing, that’s entirely what we’re focused on. So it’s very compartmentalized. We need the break from touring to even be able to write. We’re not really out writing songs on the road and that kind of thing.

Are there any major themes on Storyboards?

Ryan: I think there’s definitely some solid threads woven throughout the record, but mostly what I wanted to do on this one—and this is something I wanted to do on the other ones, but finally was able to focus on this one—is to collect everything I’ve experienced in the last three years and make it into an audio scrapbook of what I’ve been excited about or thinking about. There are separate themes on the record. I was really inspired by nature and just how everything works together and how intricate and detailed everything is, so that comes through on a lot of the songs through analogies.

For example, there’s a song strictly about memory and it tells a story with the theme being that when you recall a memory in your head, it disintegrates every time you try to recall it. So I tried to write a story based around that concept and how when we love something too much, we hold on a little too tight. There’s some real focused themes. On the last record or two, there were songs that had really focused themes, but a lot of it I also wrote in collage form. There’s lots of ideas in one song, but you couldn’t say the song was about this one thing. But on this album, for one reason or another, it feels each of the lyrics had their own story or specific theme.

Hope always finds its way into our songs and that might be the underlying banner. A lot of the songs have to do with renewal and is about how a lot of the pain and strife in our life is worth it and that runs contrary to how things feel most of the time.

With three years between releases, do you feel any pressure that you need to stay in front of your fans or hurry things up a bit?

Ryan: The people who listen to us seem very supportive. At the end of every cycle, I do feel a little nervous every time wondering if people will still listen. [Laughs] I’m sure if we made music more often, it might not feel as scary. But I really think it’s been a natural trajectory for us to get what we need done, as Dan said. It’s worked out really well for us and the people who listen to us seem kind and are very forgiving for us as we take our time. [Laughs] But we never feel any external pressure to hurry up. It’s really just a pressure to want to share these songs with other people. That’s the only pressure we allow in.

So will fans be surprised? Is the string section back?

Ryan: There are a lot of changes. There’s a lot of new instrumentation for us. I became really interested in the ukelele, so that’s taken a lot of attention. I wrote a few songs for the album on the ukelele, and sometimes it’s more front and center than others. We’ve also become more attracted to acoustic instruments, so that’s present. But the string section is back and they sound amazing.

Another thing that’s new is that we have some guests who contributed to the record and we’re really excited about that.
For example, Van Dyke Parks wrote a string arrangement for one of our songs and that was exciting for us because we’re huge fans of his work with Joanna Newsom. He also did a lot with Beach Boys and Ringo Starr and he has a crazy catalog, so that’s amazing.

Dan: We also worked with a friend, Jeremy Larson, who wrote a string arrangement for a song. Ryan Francesconi, another friend, played tambora and banjo and mandolin. We knew him from seeing him play in Joanna Newsom’s band and were just amazed at how talented he was. So we thought we’d ask him to add to some of the songs.

Ryan: I think every artist playing something has a different idea of what they put out than what everyone else hears, but for us, this record is really, really different in a lot of ways. It is a bit of a gentler record and a little softer, but at the same time, there’s a few more upbeat tempos in a few of the songs. There’s definitely an optimism in the songs as well that’s a little bit new. So along with the instrumentation and a few guests, I think it turned out to be a really different set of songs for us.

We’re really stubborn on keeping things organic. I don’t think we’ll ever sit down to write with a certain goal in mind with it outside of musical goals. I think we always let the songwriting happen as naturally as possible to see where it goes and follow along. We embrace it if it’s good and toss it if it sucks. [Laughs] But we never approach a record to fit any career goals that we have in mind.

[Storyboards is out now digitally]

Praying Outside the Lines