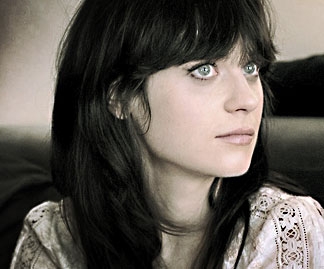 You knew when you heard her singing in the shower that this was more than a passing fling. It’s been nearly six years now since we first listened to Zooey Deschanel innocently belt out Christmas tunes behind the shower curtain in Elf. And, much like Buddy the Elf, even then we knew we were eavesdropping on something special.

Today, Deschanel is no longer just “that girl who could sing in Elf.” Far from it. She’s become a household name in her own right, having been in more than 30 films over the past decade and co-producing her first album—to much critical acclaim.

Named after the male character in J.D. Salinger’s classic novel Franny and Zooey, Deschanel is something of a classic herself. On any given night, you might find her playing piano and singing old standards at low-key shows across Los Angeles, or at home singing around the house with her fiance, Death Cab for Cutie lead singer, Ben Gibbard. “I’d consider myself old-fashioned,” Deschanel says, admitting a deep fondness for “old music, old movies, screwball comedies and vintage clothes.” She’s even been known to pick up the baritone ukelele every once in a while.

“Everything inspires me. Listening to music and watching movies is of paramount importance to making good music and great movies,” she says. “But I think just the stories that people tell—it’s all storytelling. Listening to stories in general reminds you of what makes the world come alive.”

This weekend, Deschanel is bringing her quirky indie charm to the big screen again as the co-star of the romantic dramedy (500) Days of Summer [Check out our review]. Deschanel plays Summer, a young woman who steals the heart of everyone she meets, but especially that of  a young greeting card writer named Tom (played by Joseph Gordon-Levitt). Following the 500 days in which Tom goes through a roller coaster of feelings from ecstasy to despair, the film—which was a sensation at the Sundance Film Festival in January—offers plenty of food for thought about the different ways in which boys and girls view relationships.

It’s also a film about the distance between expectations and reality—especially when it comes to romance. And, of course, that age-old question of whether or not we have a soul mate—that one person we’re destined to spend our lives with. Mixing laughter, sadness, love and the most exuberantly ridiculous dance scene since Ferris Bueller brought joyful anarchy to the streets of Chicago, (500) Days of Summer is as quirky and inspired as its star.

“I don’t think one’s interpretation of the film has anything to do with being male or female,” Deschanel says of the movie. “Everyone’s been in a position where they like somebody more than they’re liked back. I think everyone’s been each character at this point.

“It’s a deeply subjective film, and it’s from his point of view,” she continues. “She doesn’t do anything wrong, and I think acts in a really honorable way. She’s clear with him from the beginning. He’s the one who’s taking it farther than he should, given the info she’s given him.”

Deschanel says she was drawn to the film’s unconventional structure, in which the narrative hopscotches backwards and forwards in time—from day eight to day 154 to day 11, and so on—to spotlight the ups and downs of love. Ultimately, the film takes viewers on a memorable ride while offering a potent commentary on the ways that society’s choices of imagery—from movies to greeting cards—sometimes hurt more than help the human heart by distorting the meaning of true love.

“Both characters are representative of my generation’s sort of polarization on views of love,” Deschanel says. “I think it’s generally fluid for lots of people, but a lot of people swing the pendulum too far believing romance is something that happens to them or by believing there’s no such thing as romance.

“Love isn’t something you fall into—you’re as much a part of it as everyone. Tom’s whole view of love was distorted by a misreading of the film The Graduate for him, and the film’s about his finding out what love really is and misconceptions about love as a kid. Tom’s point of view is sophomoric.”

Be sure to check out our new review of (500) Days of Summer.

This article is partially excerpted from the cover story in the

Behind Hurley’s Walk for Change