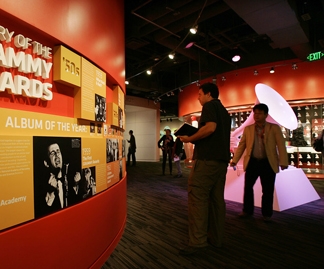 Why I Hate Church Staff Meetings

Music can be
pointless fun, providing a mindless soundtrack for dancing or singing along, or
just plain offering background noise for all moments of life. But some artists
use it to change the world—raising awareness and funds for causes that are
vital, yet would otherwise languish unnoticed.

And it’s those artists who invest their music with meaning,
from Woody Guthrie to Bono, who are honored by the current exhibition “Songs of
Conscience, Sounds of Freedom” at the Grammy Museum in downtown Los Angeles.
When the museum opened last December to commemorate the 50th anniversary of the
Grammy Awards, it chose the exhibit as its first-year centerpiece because it
made it clear the new institution would strive to show how music affects the
world at large.

“It may be the most important exhibit the Grammy Museum does
in its early history, because it sends a message that we’re going to tackle
thorny and controversial issues and how music has played a part in 200 years of
political process,” explains Bob Santelli, executive director of the Grammy
Museum. “When we took [highly political former Rage Against the Machine
guitarist] Tom Morello through and he gave it a thumbs-up, we knew we hit
something. I’ve never been asked to do so many private tours of an exhibit
ever.”

“Songs of Conscience” explores how music has long provided
Americans with a fundamental means of enacting political values. The
exhibit uses artifacts, images, multimedia kiosks, film and music to draw the
seemingly endless connections between music and politics.

Among its more than 100 artifacts and 70 rare photographs,
which were provided by wide-ranging sources that included both government
archives and private collections, are guitars belonging to Woody Guthrie and
Bob Dylan, as well as folk legend Pete Seeger’s banjo and guitar. Turn one
corner and you’ll see hip-hop pioneer Grandmaster Flash’s turntables, then turn
another and find an 1848 edition of the abolitionist handbook The Anti-Slavery
Harp.

Add in handwritten lyrics from Morello, punk legend Patti
Smith and country superstar Tim McGraw with former FBI director J. Edgar
Hoover’s secret files on activist rock band the MC5, and it becomes clear that
this is an exhibit to remember.

“This exhibit was one we intentionally made very broad,
because it covered the 230-year history of music and politics in the US,” says
the exhibition’s guest curator Daniel Cavicchi, who also serves as an associate
professor of American Studies at the Rhode Island School of Design. “In the
past, other exhibits focused solely on the folk movement or music and the labor
movement. But not one that looked at the big picture of many genres and
historical contexts together, into one story.

“We were focusing on politics in the U.S. and did want to
touch on bigger well-known stories like music in the civil rights movement,”
Cavicchi continues. “But we also wanted [music that] people didn’t know as much
about, from music in the anti-slavery movement to Muslim punk. We’re covering a
rich foundation from which people could think about the role of music in
America’s political life. We basically included stories that would spark
thinking.”

Among the most striking artifacts in the exhibit is Pete
Seeger’s banjo, which he loaned the museum after playing it for the past 60
years, and on which he wrote “This machine surrounds hate and forces it to
surrender.” Elsewhere are the lyrics Jimi Hendrix wrote for the song “Machine
Gun,” in their original form on hotel room stationary, and a letter that the
FBI’s Hoover wrote to former President Gerald Ford while Ford was still just a
Michigan congressman, ranting about the MC5 while calling them “the house band of
the radical White Panther Party” and complaining that music was fueling the
decade’s radical politics.

Yet Cavicchi, who scoured the Library of Congress and the
archives of the Smithsonian Folkways record label to compile the exhibit, found
his personal interest piqued the most by the tales of Muslim punks.

“I’d never heard of them before, so that helped make it
interesting because young Muslim-American kids felt stereotyped and people were
making judgments about them simply because they were Muslim,” Cavicchi says.
“They didn’t have a voice or outlet, so they created satiric punk songs that
put them on the map and gave them a voice about what it’s like to be a
practicing minority in a country where there’s suspicion about their loyalties.
They sent us a Stop sign from their tour bus, on which they’d stenciled the
word ‘Lies.’”

There’s plenty more to do and see at the Grammy Museum, for
those who wish to observe and hear a stunning lesson in the world’s musical
history from the past five decades. Special rooms and interactive screens
throughout enable visitors to access the recordings of nearly every
award-winner ever, while other exhibits feature an array of Michael Jackson’s
flashiest costumes and booths in which visitors can learn several defining
moments of the recording process.

“Even though we’re a music museum, we’re different in vision
than the Rock Hall of Fame or the Experience Music Project in Seattle, where I
came from,” Santelli says. “We’re more about illuminating people about the creative
process behind great music and the idea of the Grammy Award that signifies
excellence is center stage in the story we tell in the museum.”

he Grammy Museum is located at the
intersection of Olympic Blvd. and Figueroa St. at the LA Live complex in
downtown Los Angeles. Call (213) 765-6803 or visit
www.grammymuseum.org
.

The Surprise of Chase Pagan