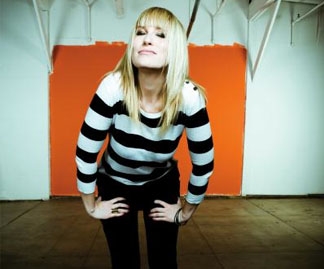 Look at Molly Jenson’s track record and you’ll realize that the
young, talented singer/songwriter from San Diego has accomplished more
before debuting one album than many achieve after two or three. Between
touring with Jon Foreman, contributing tracks for numerous network
television shows, and being crowned “one of the best new artists on
MySpace” by Teen Vogue, Jenson, with the aid of producer friend Greg
Laswell, debuted her first full-length album, Give it Time. Behind the
female mainstream sensation, however, lies a difficult journey from
artistic confinement to eventual freedom that began, perhaps not so
surprisingly, within the walls of the church.

“I grew up
singing at church forever,” Jenson says. “By the time I was 17 to
about 25, at least once a week I was singing at church … I was that
girl. Right around the time Greg called me and we started writing, I
realized the stuff that was coming out of me wasn’t churchy stuff and I
wanted to be true to that. I was singing in church for so long, I wanted to
sing about something different. I wanted to write music that would
touch people who don’t go to church and don’t believe in church. I
wanted my music to be accessible to anyone.”

Jenson is no
stranger to the west coast Christian music scene. She’s made her living
for years playing in Christian bands like Everybody Duck and leading
worship at various youth camps and conferences, but making a living or
living out a passion was a choice for the young singer/songwriter. “The
truth is you’re going to make a lot of money being a worship musician
in a church,” Jenson admits. “I was making really good money working in
the church, but I just didn’t feel like I was doing what I needed to be
doing. I think there was definitely a time where it was where I needed
to be, but I finally got to the point where I thought I could either
keep doing this and make good money at it, or I could stop and not make
much money at all but feel freedom and purpose.”

Jenson’s new
songs mirror that sense of freedom with a candid vulnerability made
that much more welcoming by her calming, liquid voice. “I think I can be
more honest now with my writing,” Jenson says. “I think there were a lot of things I
couldn’t say without feeling judged, you know? Not everybody is going
to love it, but I think it’s working.”

Not everyone loved
Jenson’s decision to engage an audience beyond the pews. While no one
would chastise a Christian businessman for working at a non-Christian
organization, audiences who are used to categorizing media into two
fields, Christian and non-, find it difficult to understand the role
many Christ-following artists feel to engage the culture at large.
“I’ve had people make it quite clear they’re disappointed in my
directional musical choice, but luckily I’ve got
people around me who are supporting me and are backing me,” Jenson says.

Jenson
is far from alone. She is joined by a growing list of musicians who
have dabbled with Christian labels only to find true liberty in
underground grassroots movements. From Derek Webb, to Jon Foreman, to
Rosie Thomas, artists are creating ambitious and intentional
alternative means to release their craft to those outside of
traditional institutions. “A lot of my musician friends grew up in
church, but are choosing not to go that route,” Jenson says. “I also
have a lot of friends in Nashville who started out in Christian music
and are now moving away from that. The truth is there’s still a lot of
money in the Christian music world, but I feel there’s a lot more truth
on the other side.”

The choice of artists like Jenson to
shift their focus to an unchurched demographic is more than a
well-calculated marketing tactic. It’s a calling. There’s a culture
that gathers outside sanctuaries, in bars, clubs and coffee shops, a
congregation desperate for honesty, authenticity and relationship.
Jenson and others beam these connecting fibers through picking patterns
and rhyming anecdotes on a regular basis.

“Here’s the big
thing with me: I believe that God gives each one of
us a gift and it’s our job to do our best with whatever He gives us,” Jenson says. “I
feel I’m doing my best when I’m playing songs that everyone can listen
to and anyone can relate to. I just don’t think it’s fair to write for
only a specific group of people. My goal is to make people feel
comfortable and not alone. My goal in music is to be honest and real.”

When Jenson traded her choir robes for jeans, a T-shirt and a nose
ring, what she gained was much more significant—a new voice, a fresh
pair of eyes, and a deeper understanding of purpose and integrity
reminding us not all truth has to come from a pulpit.

Get Up and Walk