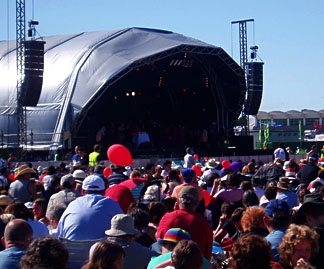 While many Christians connect online through blogs, social networking sites and even virtual church, sometimes we need to connect in real time. Andrew Jones, international blogger and missiologist reflects, “Festivals represent an opportunity to not forsake the assembling of ourselves together but rather to be together in a place where many streams of the body of Christ turn up to be accountable to each other and to enjoy each other. Or in other words, a little slice of heaven on earth.”

During the summer, thousands of young adults and other Jesus hippies backpack their way throughout Europe and the UK to participate in a spiritual smorgasbord of faith festivals. Those seeking to broaden their horizons can meet Christians from around the world while sampling a dizzying array of musical acts, worship experiences, talks, art installations, and other activities.

In light of today’s current economy and concerns about the environment, Jones celebrates the virtues of European festivals in lieu of the more pricy Christian conferences. “Festivals aren’t dependent on one or two superstar Christian celebrities who insist on fancy hotels and a hefty honorarium at the end, thus raising the price of admission and reducing accessibility to the people who really need to be there.”
Despite the devalued dollar, these low maintenance, family friendly, inexpensive events prove to be a very good deal when compared to some pricier American based events. As these festivals tend to operate on a very grassroots level, they often don’t furnish amenities like electrical plugs, Wi-Fi access, easily accessible showers, and RV hook-ups that some US conference goers take for granted. These gatherings afford people the opportunity to get unplugged, connect with nature and get good with God.

Also, the nature of these festivals serves as a counterbalance from the cult of celebrity that can often dominate an event, where at times the event seems centered around someone other than Christ. But in a festival where activities are taking place in multiple locations, even if a major speaker or band may be attracting a large crowd, one can find plenty of folks gathering in other spots. Such a diverse range of activities tends to create a more participatory environment where people seek out the spiritual experiences that speak to their heart.

While one can inquire about booking a nearby hotel or hostel, consider joining in the crew for camping, in order to enjoy the full frontal festival experience. Also, these festivals provide comprehensive recycling facilities and other environmentally friendly actions. In addition, these festivals tend to have some form of public transportation available, thus eliminating the need to rent a car. While one cannot travel to a festival and leave no trace behind, all of these moves further reduce one’s carbon footprint considerably.

For those unfamiliar with the Christian festival scene, Greenbelt UK (August 28-31) can give a perfect peek into this underground culture. While sampling an international array of speakers and performers, Americans can hear voices from Christian authors and performers living in the United States like as Shane Claiborne, Emmanuel Jal, The Psalters, Barry Taylor, Frank Schaeffer, Philip Yancey, Kevin Max, Mark Yaconelli, Brian McLaren, Walter Wink and Richard Rohr. The Rev. Steve Hollinghurst, Researcher in Evangelism to Post-Christian Culture with The Sheffield Centre welcomes the stream of international visitors that descend upon Greenbelt every year noting that “the increasingly global nature of the networks present really adds to the benefit for others from overseas as well as us at home.”

UK worship pioneer Jonny Baker observes that for American visitors, “The blend of arts, justice, and spirituality is unlike anything in the United States. Also, Greenbelt manages to hold a breadth of traditions ranging from Iona, Taize, alternative worship, Charismatic, Liturgical and Franciscan. Hence, this festival can act as both an encouragement and a spark to the imagination of people in the States.”
While camping can be a bit rustic for some, Greenbelt includes a few perks like nearby showers (be sure to sign up when you first arrive, as these slots tend to go very quickly). Those who don’t want to lug their camping equipment around can rent gear and even a tipi. There are also a number of nearby hotels and B&B’s within walking distance of the festival grounds. Moreover, numerous efforts have been made to make the festival accessible for those who are physically challenged.
After arriving at Greenbelt, be sure to check the schedule for the Festival newcomer sessions. These gatherings give those individuals traveling alone to the festival an opportunity to connect with others who are attending Greenbelt solo.

Upon first glance, the master schedule can be daunting with multiple talks, worship, comedy, performance art, prayer sessions and other events happening simultaneously. Among the festival highlights include the Sunday service where the vast majority of festival goers converge for communion, worship hosted by Grace (a London based emerging community), and hanging out with the Iona community.
Stroll around the various smaller tents to get the behind the scenes scoop on a host of underground and emerging ministries. Fair trade products are available for sale along with books, CDs and other items related to the festival. Even if one doesn’t drink, stop by the hymn sing in the organic beer tent. (This is the only place where alcohol is permitted, thus keeping in line with Greenbelt’s ethos as a friendly festival.) Be sure to spend some times in the New Forms alternative worship program. This unique space allows for opportunities to explore creative alternative worship from the edges that can’t be experienced in quite the same way anywhere else. In addition, check out the Unusual Suspects, a program sponsored by the Proost UK that highlights up and coming young artists. A full kids’ schedule allows children to explore God’s creativity with interactive programs and performances geared for various age levels.

Over on the continent, one can find a host of underground faith festivals taking place in Europe. While the camping can be a bit more rugged, the cheap price and the hospitality are worth it for those who are willing and eager to rough it a little. Here’s the lowdown on two of the more popular gatherings.

SLOT in Polish is an abbreviation for words meaning “Foundation of Local Creative Centers.” Over 5,000 teens and young adults from Poland and the neighboring countries converge at an old Cistercian Abbey from July 8-11 to find their inspiration for involvement in culture, education and society in Christianity. This holistic gathering offers concerts on four stages, club parties, multimedia, theater, movies and over 100 interactive workshops, thus lending a carnival-esque atmosphere to the mix. In 2009, Kalejdoskop, an invite-only gathering of worship leaders from over 30 countries will be taking place during this festival, thus adding to the international flavor of the festival.

This festival (running from July 29 to August 2), which has been hosted by the Jesus Freaks International since 1995, attracts over 5,000 largely Goth and hardcore Christians. So, leave the bright summer tourist-y T-shirts at home unless you want to be identified as a “tourist.” Download the freak floor “What’s up” guide, so you can be aware of the main events though every morning check out the “FAZ” that will note all the changes for the day.

Some additional summer faith festivals held in the UK and Europe that offer websites include:

Mitski Has Announced a New Full Album, ‘Laurel Hell’ — Listen to ‘The Only Heartbreaker’ Now

Creation Fest (UK, not affiliated with the US based Creationfest)
August 7-13, 2009

Before venturing across the pond, search Facebook and other social networking sites to connect with fellow festival goers. Also, a Google search can find any bloggers who are talking up the festival, so you can get the most up-to-date information. In particular, Andrew Jones is traveling throughout Europe and he will be blogging about his journeys, which will include visiting some of these festivals. Check him out here. In addition, Jonny Baker will be offering a comprehensive overview of Greenbelt UK.

So, grab a backpack (travel light, though be sure to bring along a water bottle, sunscreen and a pair of comfortable walking shoes), book your tickets and join in the festival fun.

Where Am I Wearing Wednesday: Pajamas