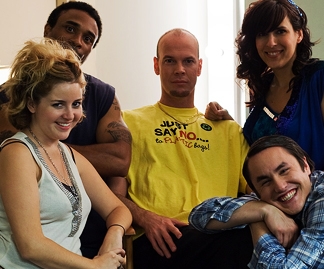 Probably every RELEVANT reader has cringed at the sound of a lame Christian-pop artist, whether due to their overly drippy lyrics, excessively joyful vocals or glossed-up instrumentals. But because these artists are at least trying to serve the Lord by bringing holy entertainment to the world, it’s often been hard to poke fun at them too harshly.

Consider that taboo broken, as the new feature film comedy Jesus People applies the mockumentary stylings of  comedy classics ranging from Rob Reiner’s This is Spinal Tap to Christopher Guest’s A Mighty Wind to tell the wildly satirical tale of America’s absolute worst Christian music act. While its writers, Rajeev Sigamoney and Dan Ewald, and director Jason Naumann, are all believers, they also felt that the time had come to ask that if you can’t laugh a little—or a lot—at the Christian culture you’re in, how strong is your faith in the first place?

“A friend of Dan’s asked us to pitch him a couple film ideas, because he had money to do something independently," Sigamoney says. "Dan has written for a lot of Christian music magazines, both of us love Guest films, and we started thinking, ‘What would Spinal Tap look like in the world of really cheesy Christian music?’ We decided to shoot six episodes of a continuing webisode series. We did the first three in two days and also shot a music video for the group. Independent Comedy Network took it on, got it onto YouTube and Funny or Die, and soon we had half a million hits.”

With that popularity also came controversy, as Christians quickly became divided over the online shorts.

“We always wanted to be evenhanded about it—we weren’t trying to take down religion or leave it off the hook either. We wound up on the front page of YouTube for two or three days, got 300- to 400,000 hits and generated 2,000 to 3,000 comments,” Sigamoney says. “It was half and half, with people who loved it saying, ‘I’m a Christian and this is the greatest thing I’ve ever seen,’ and others saying, ‘God will not be mocked’ and that we’re going to hell. People were debating a lot.”

The Jesus People film takes viewers through the ups and downs of the group’s entire history, from its founding by a preacher who’s trying to save his son’s soul, through its hit single “Jesus, Save The World,” to their eventual splintering over hilarious creative, personal and spiritual differences. At its core is the character of Ty Raney, an African-American group member who starts to realize they don’t have the talent to last and attempts to build his life on a more solid grounding.

The challenge of taking on such a big project was alleviated by the fact that Sigamoney and Ewald had shot multiple TV pilots before. Both are graduates of the Christian screenwriting training program Act One: Writing for Hollywood, and had met in a TV-writing workshop the program offered in 2003. Their backgrounds were disparate, as Sigamoney was Maryland-raised and had been an engineer trained by and later working for the prestigious Johns Hopkins University, while Ewald skipped college completely and started pursuing his Hollywood creative ambitions almost as soon as he graduated high school in his hometown of Grand Rapids, Mich.

“In early 2004 we started shooting The Room, our first pilot, which was going to be shot ghetto-style until our friend Kurt Schemper, who was head of post-production for [legendary sitcom kingpins] Carsey Werner, came aboard and enabled us to shoot at the CBS Radford Studios,” Ewald says. “Our producing skills were put to the test and it was very well received by the town, it was a great experience and got us 30 to 40 meetings and the ability to shoot a couple other pilots, like The Captain, our latest sitcom with an A-list cast of improv people like Jennifer Coolidge, Wanda Sykes, Cheryl Hines, Kathy Griffin and Michael Hitchcock from [Christopher Guest’s film] Best In Show.”

Ewald and Sigamoney sold stocks and shares in order to fund the budget for the film, which, unlike the highly improvised webisodes, was fully scripted while allowing actors to do a few improvised takes after the written ones were safely in the can. As a result, the film was able to draw some top-flight talent as well, including Wendy McLendon from Reno 911, Laura Silverman from The Sarah Silverman Program, Tim Bagley from Monk and Will & Grace as a Christian video director.

The film’s actual director, Naumann, shot the feature in just 11 days, shooting half the film at multiple locations on one church campus over six days straight before finishing with other locations in two three-day weekends. That speed came from his familiarity with the writer/producer duo’s approach, having worked with them before on a short called “Happy Wednesday” about a comedian who sells a friend out for success.

Now the trio are awaiting their biggest night yet with the film, as it’s set to have its official premiere at the Belcourt Theater in Nashville on April 21 during the weeklong festivities surrounding the Dove Awards. They’ve noticed the buzz growing at fevered pace, as numerous real-life Christian artists have expressed their desire to see the film and fill the 370-seat theater weeks ahead of time. The hope is that positive buzz from the screening will help boost the film into a healthy distribution deal so that the public everywhere can see the film.

“Films involving Christian characters are typically vicious, with almost a personal vendetta against religion," Ewald says. "We wanted our movie to be funny and even-handed. We’re no more a ‘Christian film’ than Curb Your Enthusiasm is a ‘Jewish sitcom.’ We have everyone from Christian pop artists to the local chapter of atheists coming to the Nashville premiere … proving that it’s a movie for everyone."

Watch the trailer for Jesus People and decide for yourself if you think it crosses any lines.