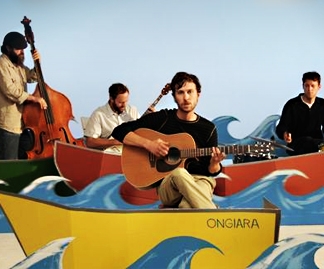 The rural rhythms of southern Ontario were the childhood backdrop for Tony Dekker, and they continue to play out on each and every recording of Great Lake Swimmers. The imagery and focus on nature and the created order dominates every disc and their latest—Lost Channels—is no different, utilizing recording techniques to play in the very places he’s describing. RELEVANT recently caught up with Tony Dekker to discuss the new album and the importance of being in touch with creation for the artist.

RELEVANT: Being in touch with nature or creation is such a strong aspect of your albums. Does the new album depart much from that or track with that theme?

Tony Dekker: Yeah, the new album is an extension or another step from the last one. It’s not drastically different, but it’s still taking a step in a bit of a different direction for us in terms of the songwriting being a bit more concise and using that medium of the song as an idea. As far as the themes running through it, that’s always been the theme—that there’s a spirituality in nature and trying to find those links in the natural world. I think you can trace that through in the new album as well.

RELEVANT: Is that an artistic responsibility for you personally?

Tony: For sure. I grew up in a small farming community in southern Ontario, so that’s something I have within my bones being in that rural environment. It’s something I have some insight on. When you put that up against an urban environment, which also has its own set of rhythms and its own heartbeat in a way, you can start to draw out a lot of interesting comparisons there—how urban and rural rhythms can match up at some times and, in other times, they’re drastically different.

RELEVANT: Speaking of rhythms, are you finding your own rhythm, this being your fourth time in the studio?

Tony: I think so. I also think that’s true from a songwriting perspective, too. With this album, I was trying to get to the point within that allotted three- to four-minute time period of a song. There’s always a balance between trying to create a mood—at least for me—and to relay an impression, aside from just specific narrative or storytelling. It’s always been important to balance an abstract idea as well as an actual story about something. With these songs, I was trying to narrow it down a bit more and be concise—to say this is what a song is about and yet leave it also open to interpretation. But we were wanting to narrow the focus a bit more and not necessarily be pure narrative but be to the point.

RELEVANT: That has to be so difficult, to take some of the imagery or the themes and place them within a three-minute song structure. It almost seems antithetical to some of your topics.

Tony: Yeah, it’s a challenge. I wanted to give myself that kind of a parameter to see what could happen. It’s a challenge to edit myself down. Sometimes it starts with two or three or four pages of writing, and to narrow it down or distill it to a few verses and convey what you want to say within that time period was a big challenge and one that I didn’t always stick to. But I did enjoy trying to do that. It’s in the larger sense what we do with our recordings. We try to set some parameters that say that we only have so much time to record in this place, so let’s see what we can get. Let’s see what kind of performance this space brings in this amount of time. So we did that with this album as well, to see what happened when I put that set of parameters on the song.

RELEVANT: Does everyone weigh in on that?

Tony: No, I basically write the songs for just an acoustic guitar and voice, and I get into a quiet place and go through writing cycles and try to have everything fully complete before I bring them to the musicians in the band I am playing with. This time around, it was interesting for me to watch the songs transform as I brought them to the band. I encouraged everyone even more so on this record to put their take on it and add their particular touch or flavor on the songs. So it was really interesting on the songs that were just guitar and vocals, that were essentially folk songs, and then watch as they took on a whole different shape once we added instrumentation.

RELEVANT: I would think that would be exciting and fearful.

Tony: Definitely, but at the same time, I’ve grown to trust the people I’m working with, and it was interesting to invite them into more of a collaborative role. Obviously, I had some ideas for arrangements and melodies in my head, but there’s a certain level of trust to be there for me to give them free reign to bend and shape the song a little bit.

How to Beat the Recession: Go on a mission trip