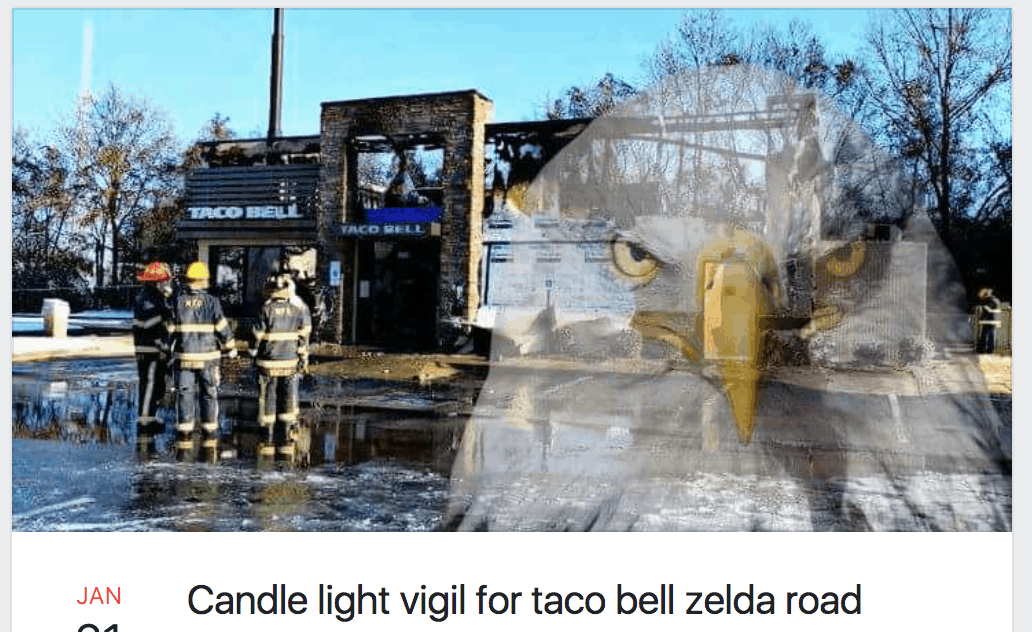 Sometimes, the news really hits home. It affects us personally, and deeply, and emotionally, in a way we can’t escape when we click away from the news or turn off the television.

Last week, a small community of taco eaters experienced that exact feeling, when a beloved Taco Bell establishment went up in flames and was destroyed in Montgomery, Alabama. No one was physically hurt in the fire, but man, think of all the hearts that took damage.

@tacobell It is with extreme sadness that we inform you of the loss of our community Taco Bell due to a fire..

I have been asked by all interested and partaking if you would donate tacos to the candle light vigil and join in our grief as we mourn our Taco Bell loss#NEVERFORGET pic.twitter.com/dXdNLwpCeY

A candlelit vigil was organized on Facebook, and about 100 people eventually showed up to pay their respects to the lost purveyor of chalupas, crunchwrap supremes, and nachos bell grande. People donned Taco Bell merchandise and stood in a nearby parking lot and thought about all the taco sauce packets that must have gone up in flames. A live performance by “The Baja Angels” accompanied the service.

Vigil at the Zelda Road Taco Bell features a live performance by a group calling themselves the Baja Angels @ALNewsNetwork pic.twitter.com/6IwZcfQhSy

Taco Bell is survived by tens of thousands of locations worldwide. We’ll miss this one especially, though.