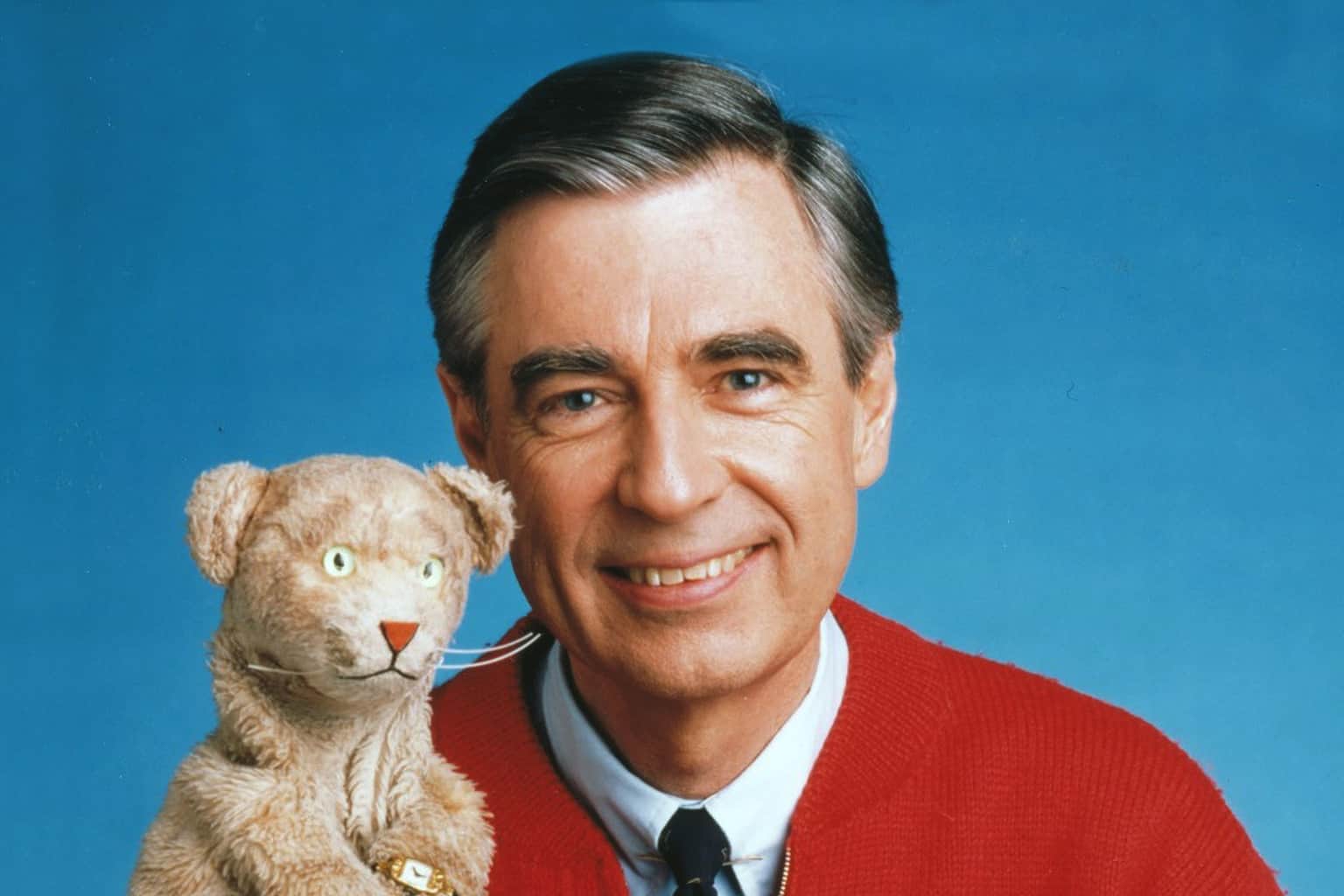 Editor’s note: This piece originally ran in 2014. This week, a biopic about Fred Rogers called A Beautiful Day in the Neighborhood releases to theaters.

If you haven’t seen it, Fred Rogers’ acceptance speech for a Lifetime Achievement Award at the 1997 Emmys is a fascinating watch. After being introduced as “the best neighbor any of us has ever had,” by Tim Robbins, Mr. Rogers takes the stage amidst uproarious applause. A humble, gray Presbyterian minister being heralded as a hero on television’s flashiest night—he sticks out, not just by virtue of his age, but also a sort of sheepish grace. This man does not have a false bone in his body.

What happens next is probably singular among award shows. Mr. Rogers steps up to the microphone, and issues an order. “Would you just take, along with me, 10 seconds to think of the people who have helped you become who you are? Those who have cared about you and wanted what was best for you in life. I’ll watch the time.”

At first people chuckle a little—is he serious? But as he looks down at his watch, you can see that he clearly is, and the hall falls silent. And then, as the camera pans the room, you see that he’s working that old magic of his. People are biting their lips. Mascara is running. It took this gentle, kindly host of a children’s program a mere 10 seconds to strip a television award show of its pomp and circumstance, injecting a moment of real, beautiful feeling into it. Speedy delivery, indeed.

It’s hard to know how to approach Mr. Rogers’ legacy without bursting into fanboy gushing. Nostalgia is big these days, and it’s easy to prattle on about Space Jam or Pokemon and how much they meant to you when you were a kid, and there’s nothing wrong with it. But for people of a certain age, Mister Rogers’ Neighborhood remains in its own stratosphere of childhood memories. Other shows may have been more educational, funnier or more creative, but none of them had Mr. Rogers. He was, in every way, the real deal; a genuinely warm presence who spoke to you as if you were sitting on his knee. There wasn’t a hint of marketing sheen or focus groups in the show—just an elderly man who loved children. It was not in any way an act. “One of the greatest gifts you can give anybody is the gift of your honest self,” he once said. He lived that out every second of his show.

There’s been a recent backlash against how frequently this generation has heard that it’s “special,” and maybe some of that is deserved. But when Mr. Rogers called you special, it didn’t feel like entitlement or mindless praise. It felt more like a responsibility—like he was reminding you to live up to something. And even when you didn’t live up to it, he was still there with those simple words that, even now, carry an awful lot of emotional heft: “I like you just the way you are.”

When asked why he started the show, he famously told CNN, “I went into television because I hated it so, and I thought there’s some way of using this fabulous instrument to nurture those who would watch and listen,” which is something many of us would do well to think on still today. The show took root and became one of the most acclaimed children’s shows of all time.

In the years since his death, his legend has grown. Some people say he wore cardigans to cover up his tattoos (false.) Some say he started every morning by skinny dipping (true.) Instead of adding to the myth, we’ll turn the microphone over to him.

Here are a few of his own thoughts on love, community and being a neighbor.

In His Own Words

“We live in a world in which we need to share responsibility. It’s easy to say, ‘It’s not my child, not my community, not my world, not my problem.’ Then there are those who see the need and respond. I consider those people my heroes.”

—Spoken in 1994, quoted in his obituary in the Pittsburgh Post-Gazette.

On Loving Our Neighbors

“You know, I think everybody longs to be loved, and longs to know that he or she is lovable. And, consequently, the greatest thing that we can do is to help somebody know that they’re loved and capable of loving.”

“I believe that appreciation is a holy thing, that when we look for what’s best in the person we happen to be with at the moment, we’re doing what God does; so in appreciating our neighbor, we’re participating in something truly sacred.”

—Commencement Address at Middlebury College May, 2001

“What do you think it is that drives people to want far more than they could ever use or need? I frankly think it’s insecurity. How do we let the world know that the trappings of this life are not the things that are ultimately important for being accepted?”

From The World According to Mister Rogers:

“There is no normal life that is free of pain. It’s the very wrestling with our problems that can be the impetus for our growth.”

“Love isn’t a state of perfect caring. It is an active noun like struggle. To love someone is to strive to accept that person exactly the way he or she is, right here and now.”

On the Value of Life

“As human beings, our job in life is to help people realize how rare and valuable each one of us really is, that each of us has something that no one else has–or ever will have–something inside that is unique to all time. It’s our job to encourage each other to discover that uniqueness and to provide ways of developing its expression.”

“Forgiveness is a strange thing. It can sometimes be easier to forgive our enemies than our friends. It can be hardest of all to forgive people we love. Like all of life’s important coping skills, the ability to forgive and the capacity to let go of resentments most likely take root very early in our lives.”

“The real issue in life is not how many blessings we have, but what we do with our blessings. Some people have many blessings and hoard them. Some have few and give everything away.”

“If you could only sense how important you are to the lives of those you meet; how important you can be to the people you may never even dream of. There is something of yourself that you leave at every meeting with another person.”

“Discovering the truth about ourselves is a lifetime’s work, but it’s worth the effort.”

We Found the Writer Behind That Surprisingly Spiritual ‘X-Men’ Episode